You may have got your positive pregnancy test this week and congratulations if that is the case, you are officially a mama in the making and you are now officially pregnant!! Your little embryo is now the size of a poppy seed or for foodies like me…. a crumb of a cookie.

Now you have your positive pregnancy test you may be looking for early pregnancy symptoms and if you are 4 weeks pregnant with no symptoms you might be a little worried …. BUT FEAR NOT!!

Being 4 weeks pregnant with no symptoms is actually very common, many mums to be mistake pregnancy symptoms for the usual PMT symptoms – after all, they are very similar.

Let’s delve a little further into pregnancy symptoms that you may experience at 4 weeks pregnant.

At 4 weeks pregnant your little embryo may have just implanted and that is when you begin producing the HCG hormone, HCG is the pregnancy hormone and rises as your pregnancy progresses until around 10-12 weeks then it plateaus after the first trimester, often the higher HCG the more symptoms you are likely to have and pregnancy symptoms tend to last until week 12 of pregnancy (The first trimester).

When we see pregnant women on TV, we often see them vomiting before they even get the positive pregnancy test but realistically for most women, the earliest symptoms are very similar to PMT which is why it is so hard to distinguish. Many pregnant women say their first inkling of pregnancy is actually their missed period and then they start to look back over the last month and piece the subtle symptoms together.

When do pregnancy symptoms start?

What are the earliest pregnancy symptoms to look out for?

We gathered together some MyBump2Baby mums common symptoms that they experienced in early pregnancy;

“It was weird for me, i had literally no symptoms at 4 weeks pregnant and one and a half weeks later i had terrible morning sickness. The morning sickness started during the night and gradually got more intense as my pregnancy progressed” Kaci

“pregnancy week by week articles were telling me i should be feeling this and that and the trust was i didn’t feel much at all at 4 weeks pregnant. I didn’t even feel pregnant and i was convinced my test must have been wrong. I began experiencing pregnancy symptoms at around 6 weeks pregnant. I booked my first ultrasound scan at 5 weeks due to spotting.. The symptoms we frequent urination, a strong sense of smell, and breast tenderness.” Sara

Other common symptoms are:

Do no pregnancy symptoms mean I am more likely to have a miscarriage?

Many women who are expecting worry that they don’t feel sick or they aren’t feeling pregnant and what many women forget is that it is likely that your body is very early to pregnancy and as the first trimester goes on the HCG levels will increase until they plateau at 10 – 12 weeks.

Join Carla, MyBump2Baby’s founder, on her pregnancy journey, where she shares her real experience week-by-week throughout her pregnancy. 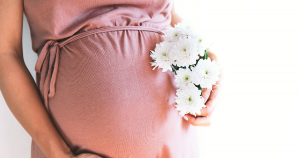