Can an Ovulation Test Detect Pregnancy? - MyBump2Baby
Grow your Business with MyBump2BabyFOR BUSINESS

If you have found this article, you are probably wondering if you are pregnant. Sometimes, when you are trying to conceive it can seem like all you do is wee on things, when you are not peeing ovulation test strips, you are peeing on pregnancy tests. Sometimes trying to get pregnant isn’t as romantic as we once thought it would be.

Working out your fertile days can be hard, first of all you are checking for your lh (Luteinizing hormones) surge by peeing on ovualtion tests trying pinpointing ovulation day, working out when the fertile window starts, checking your cervical mucus to check it matches what it should and then trying to have as much sex as you can within a small window… I mean it is honestly like a full time job, not to mention the emotional rollercoaster that comes with it.

Trying to conceive can actually be a really stressful time for couples wanting to see results right away. Unfortunately, not all pregnancies happen quickly and it can actually take up to 2 years to get a positive test.

Luteinizing hormone is something I only heard of once I started paying more attention to my menstrual cycle more closely. I never tracked my cycle before and when I found out that ovulation only happens once per month and you literally have one chance of pregnancy each month it shocked me, not like in the movies.

Home Pregnancy Tests or use an ovulation test?

Sometimes, we can end up spending a fortune on home pregnancy tests searching for two lines in the window and a positive result, the trouble is for many of us the two-week wait is just too much to bear and the waiting, symptom spotting and daydreams about cuddling our bundle of joy that we simply cannot wait to take a pregnancy test.

It is almost like the pregnancy tests call to us from the local Tesco around the corner…. and as much as we promise ourselves we won’t test too early next time we cannot help it, we just long for the control line and the pregnancy hormone line to appear.

Do Ovulation Tests work for Pregnancy

Ok, so here you are, your at the point where you need to test and you may not have any pregnancy tests in the cupboard and perhaps you just NEED to know if you are or not. You have 2000 ovulation sticks so can you use ovulation tests for pregnancy?

Will the Ovulation test be positive if pregnant? 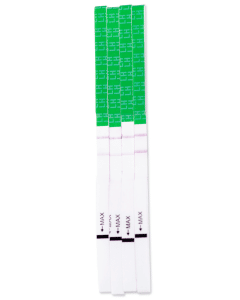 Although ovulation strips are detecting for an LH surge not for HCG (the pregnancy hormone) they can sometimes bring up a faint line to show pregnancy, please note we do not recommend this because you could be having a LH surge when you check and you may see two lines in the window which will get your hopes up, we do recommend using a pregnancy test instead of a ovulation test even though an ovulation test can potentially detect early pregnancy.

Ovulation Test Line is getting Darker does this mean I am pregnant?

The idea with ovulation test strips is when the line gets dark you are having your lh surge and you are officially in your fertile window or fertile days, this is when you should be having sex with your partner as the egg release is imminent.

Trying to get a positive pregnancy test 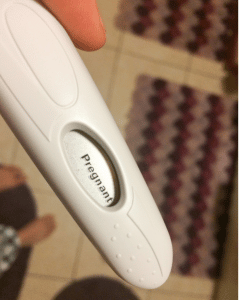 Getting pregnant can be a very stressful time especially if you have been trying to get a postive pregnancy test for a while. Trying to conceive is all about having sex at the right time, you literally have one chance to get pregnant every month which is why it can be frustatrating when it isn’t working.

Ovulation Kits can help you get pregnant

Using ovulation kits to measure your lh levels is a great way to predict ovulation ahead of time. Having sex every other day throughout the cycle can get a litte regimented so using ovulation tests helps women conceive.

What is an LH Surge – does it mean I am in my fertility window?

LH Surge (Luteinizing hormone) is a hormone that is present before ovulation. When an ovulation test strip is positive it means means that ovulation is imminent and that you are likely to release an egg in the next 36 hours. This is the time that couples focus on having the most sex to ensure they have a sperm waiting for the egg.

The egg only survives for 12 hours without ferilisation and once the time is up, you have missed your chance for pregnancy in the cycle.

Laura “Many times I have asked myself can ovulation test detect early pregnancy especially when I ran out of pregnancy tests. I have used one with my first son and got a very light second line when I was 14dpo, I do often get a second line on ovulation sticks anyway so I didn’t feel very confident with that so ended up going to the shops and getting my official BFP with a clear blue digital”

Sam “Ovulation tests took the pressure from me and my husband trying to do it every 3 days throughout the month, if we missed one we used to get angry but now I know when I am ovulating because i record my body temperature, check my cervical mucus and use an ovulation test for the lh surge. I am now getting in the swing of knowing my fertile days by just looking for certain indicators.”

Amy ” I know my fertile days by using ovulation test stripes to measure my lh surge and my basal body temperature. Getting pregnant is stressful especially when you got pregnanct easily the first time. Seeing a positive tesult of the ovulation tests means I know when my fertile window is. I use the cheap ovulation sticks from Amazon but you can get better ones, they are just more expensive and mine tends to do the trick although I am yet to report the next pregnancy after 12 months of trying to conceive”

Suzy ” I use the clearblue easy fertility monitor and swear by it, I wouldn”t use an ovulation test strip again after getting a positive result once, I was so excited but it turned out I had my lh surge late in the cycle. There are some fab fertility monitors out there

Loz ” I had 2 lines on ovulation test and ended up pregnant, I couldn’t test as I had no home pregnancy tests, a friend of mine told me she picked up her pregnancy on a ovulation test strip so i thought I would try it and lone behold I was pregnant”

Sez “I have been getting pregnant for a while and was told to keep an eye on my menstrual cycle and lh surge using ovulation tests. I found that I have a few surges throughout the month and I believe this can be quite common for people with POS. The ovulation predictor kits were great for me as it meant that the unusual lh surges were picked up and I went to my doctor. I decided to start using a fertility monitor that measures my basal body temperature and pinpoints ovulation to the day even though ovulation can sometimes be once every 120 days.”

Laura ” We start testing with home pregnancy tests each month, i know that I shouldn’t but I can’t help it, we have always began to start testing from 7po, a lot of people say it is too soon to start testing but the two week wait drives me insane, my cycle length is 35 days and I ovulation on day 15 so 20 days to wait is just too long so I always test for pregnancy, I am thinking about using a fertility monitor from my next period as well as testing as i have read some good stuff about using these to get positive results”

Jenny “the process of getting pregnant for many women starts as fun but when things don’t go to plan we can start worrying, i was worried about my chances of getting pregnant as i am getting older, i became desperate and found that I was very stressed. I used ovulation test strips evey month to detect a pregnancy as I promised myself every month that i would stop pregnancy tests but then in the two week wait i would often become impatient and start testing with anything i could”

Jess “I know that hcg can’t be picked up on ovulation tests but i have used them to test for pregnancy before when i have been out of pregnancy test strips. Hcg is the hormone that is released after implatation. Ovulation tests detect pregnancy in your urine but if you often get faint lines anyway i wouldn’t recommend testing your urine using ovulation tests. I do recommend monitoring your temperature over several days as this can help predict ovulation”