The day you learn your baby’s gender is a very exciting one! MyBump2Baby bring you this article containing Gender Reveal Ideas You’ll Love.

Give your gender reveal party a spanish feeling with this gender reveal idea! Just ask either a close friend or family member to fill a neutral-coloured pinata with pink or blue sweets and confetti, and let the parents-to-be have fun swinging at it!

Or, you could let each of your gender reveal party guests have a swing each to share the fun!

As each guest arrives, ask them to choose either a pink or blue coloured item- according to which gender they predict the baby will be (this can be anything- pink or blue party hats, crowns, badges or even goofy hats). Once the gender is revealed, whoever guessed the baby’s gender correctly will win a prize.

There are a few cakey gender-reveal ideas you could use for your special occasion:

For a sparkly way to reveal your baby’s gender, gender reveal glitter cannons are the way to go! You can find plenty of these sparkly cannons online to add a twinkle to your big moment.

For this baby gender reveal idea, all you need is a big box, and a bunch of helium filled pink or blue balloons. The parents-to-be just need to open up the box and watch the balloons fly, revealing the baby’s gender!

Or, alternatively, you could take a family photo and sneak in a pink or blue baby item- and reveal the baby’s gender to all of your social media friends and your family at the same time.

This idea can be done at home for just your partner to figure out, or at a gender reveal party for all of the guests to have a crack at.

Here are some sweet gender announcement riddles your loved ones will enjoy solving. 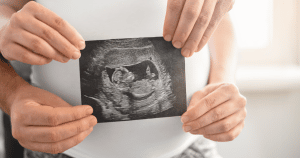