Our articles contain affiliate links which means at no cost to you, we may earn a small commission if you buy something through our website.

Struggling with a lack of confidence can be a really difficult experience for a child, as this should be a period during which time they can run free without a care in the world. Fortunately, learning how to promote confidence and self assurance in your little ones doesn’t have to be as tricky as you might initially imagine, as there are in fact just a few basic steps that you can follow to transform the way that they feel in no time at all. So, if you’re interested in finding out more, then simply read on!

Be a Great Role Model

First and foremost, you have to make an effort to be a confident role model if you want your children to follow suit. They will look to you for guidance and most likely mirror your actions and the way that you behave, so if you’re constantly hiding yourself due to a lack of confidence then they will be encouraged to do the same. Of course it’s not always easy to be a confident and outgoing person, but for the sake of your children it’s far more beneficial to ‘fake it til you make it’, so to speak. Showing that you aren’t scared of or intimidated by anything that life has to throw at you will set the perfect example for your children, and they will no doubt think that you are some kind of superhero as a result of your strength and confidence. If they can look up to someone who embodies self assurance, they’ll have a much better chance of following in your footsteps.

Join A Club With New People

Encouraging them to join a club that’s filled with new and unknown people is another brilliant way to encourage your kids’ confidence to grow, as they’ll be placed inside an unfamiliar environment with unrecognisable faces, yet still have a really fun time in the process. Joining them up to a local football team or gymnastics class is a great place to start, as they’ll be surrounded by kids their age and this means they’ll have the opportunity to strike up a conversation and make some new friends. Encourage them to get involved with the club they join, as their confidence will certainly grow each time they try something new. Being part of a club can also offer them a sense of belonging and team spirit, which can do wonders for self assurance. Just make sure that they do not isolate themselves or remain totally independent despite joining a club, as you might need to motivate them to get properly involved rather than standing on the sidelines. Clubs and classes are often led by instructors or teachers too, so they can pick up some great tips to encourage following directions in the process.

Don’t Try To Overly Shield Them

Attempting to protect your children by overly shielding them from the world is going to do nothing to improve their confidence, as they’ll soon realize just how scary and intimidating reality can be whenever they step foot outside their front door. You cannot lie to your children and try to convince them that the world is a wonderful place filled with roses and happiness, as this simply isn’t the truth. They’re bound to encounter a host of different stumbling blocks and dangers throughout their life, and they need to be prepared for these rather than being totally unaware. Don’t try to overly shield your little ones from the negativity of the world, as it’s just a part of life that they need to accept just the same as you do. Forming lies to cover for yourself or others is where the spiral can begin, as claiming that their pet fish has ‘moved out’ rather than passed away is going to be confusing to say the least. If bad things happen, which they will, you need to be honest with your children so that they have a better chance of properly understanding the situation.

Helping your children to gain confidence has never been such a simple task when you can take the time to utilize some of the brilliant tips and ideas that have been carefully explained above. Confidence is not something that you can develop sufficiently in a day or two as it takes time, but the time and energy that you put into your child will no doubt be worth it when they can grow into a happy, strong and self assured individual who isn’t scared to take on everything that life throws at them. 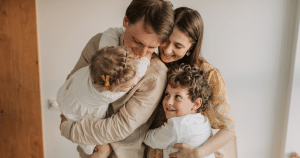