Usually any potential placenta complications are picked up at the 20-week scan and a lot of placenta problems generally correct themselves during the pregnancy.

The term “Anterior Placenta” means that the egg has implanted on the side of your uterus which is closest to your abdomen with the baby behind. Usually the placenta is behind and the baby is at the front.

Anterior Placenta alone does not cause any risk to you or your baby, however it may be more difficult to feel your babies’ kicks early on in your pregnancy, it could also be more difficult for a doctor or midwife to find your babies heartbeat. More often than not the Placenta Anterior moves later on in the pregnancy.

Low lying placenta is also known as placenta praevia means that the placenta is attached to the lower part of the womb near to or covering the cervix and depending on how much the placenta is covering your cervix it may leave you with no option other than to have a c-section otherwise known as a caesarean.

When my placenta did not move I was told that I would be booked in for a c-section at 39 weeks. I secretly was terrified of labour so always thought a c-section would be a better option for me however when a normal labour is taken away from you it does always make you feel a bit disappointed that you won’t experience a “normal” birth however listening to all my friends birth stories makes me realise there is no such thing as a “normal” birth and regardless of how your baby is born is still a miracle no matter what.

Unfortunately, with placenta praevia there is a chance of bleeding heavily during the second part of pregnancy. The bleeding can be very dangerous and in very rare cases it can be fatal.

The Cause of Placenta praevia is unknown however it does occur more often in women who are older, who have had pervious pregnancies, smoke, have had a caesarean or scarring on their uterus. Unfortunately, if you have previously had placenta praevia you would have an increased risk of further placenta problems if you go on to have more children however my doctor has advised that just because the risk is greater this does not mean that it is likely to happen.

The signs of placenta previa are as follows;

Only a few years ago any mothers with placenta previa used to have to stay in hospital right up to delivery because the blood loss is extremely dangerous and can happen at any time. If there is any sign of bleeding it is important to go straight to hospital where they will monitor you and the baby. I had to go in to hospital with this many times and had to stay in for a minimum or 24 hours from the last bit of blood.

If you have experienced bleeding during your pregnancy it is likely that you will be put on pelvic rest which means no sex. This was a nightmare for me as I had a high sex drive throughout the pregnancy… I guess It gave my husband a break though. 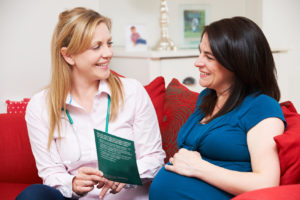