Ovulation Bleeding: What is it? What causes it? How can you identify it? Approximately 5% to 13% of women experience vaginal bleeding or spotting between periods. This can indicate a variety of things- from pregnancy to health issues. The vaginal bleeding you are experiencing in between your periods could also be ovulation bleeding. 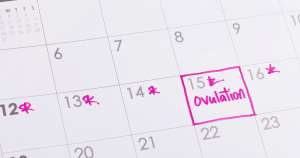 Ovulation is what happens when the ovary releases a mature egg- usually around the middle of a normal menstrual cycle.

There are a few ways to tell if you are ovulating- the first way is by tracking ovulation and the next is by looking at ovulation symptoms.

Below are some of the potential ovulation symptoms:

Another potential symptom of ovulation is weight gain. Weight gain during ovulation can have a variety of causes, such as low progesterone levels, changes in insulin levels, appetite changes, water retention or water retention.

Why Am I Bleeding During Ovulation?

Ovulation bleeding is light bleeding or spotting, that occurs around the time you would normally ovulate.

Higher levels of luteal progesterone and luteinizing hormone are observed in women who experience ovulation bleeding between periods.

Bleeding during ovulation may also have other causes.

In addition to bleeding during ovulation, sudden changes in hormones, specifically when there are two surges of the lutenising hormone (LH), can cause you to ovulate twice in a month.

How Long Does Ovulation Bleeding Last?

Ovulation bleeding typically occurs for between one to two days within the ovulation window.

Is Bleeding During Ovulation Normal?

Only around 1 in 20 regularly menstruation women experience bleeding or spotting during ovulation- or bleeding outside of their regular periods- but it is usually nothing to worry about.

When Should I Be Concerned About Ovulation Bleeding?

Ovulation bleeding should occur during the window of ovulation- at around 11-21 days after the first day of your last period.

You also should not experience heavy ovulation bleeding; heavy bleeding during ovulation is considered abnormal.

Whilst vaginal bleeding often isn’t a cause for concern, if you are experiencing heavy bleeding, pelvic pain or painful periods you should consult your healthcare professional.

You should consult your healthcare provider who will help to identify why you may be having abnormal uterine bleeding between periods. 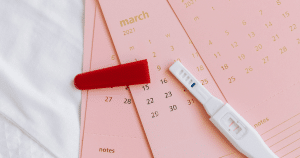 Implantation bleeding occurs after implantation- where the fertilized egg attaches onto the lining of the uterus.

Implantation spotting or bleeding typically occurs a few days before your next period- or after ovulation. More specifically, implantation occurs anywhere between 6 DPO and 12 DPO (days past ovulation).

Around one in three women experience implantation bleeding. It is commonly one of the earliest signs of pregnancy.

Ovulation spotting or bleeding typically occurs mid-cycle- around the time that your body releases its egg.

The below symptoms are symptoms of ovulation bleeding.

Other Causes of Spotting Between Periods

Other causes of bleeding during ovulation, or irregular bleeding between periods include:

If you experience spotting or abnormal bleeding in between periods, you should consult your healthcare professional to rule out any medications, disorders or conditions that may be the cause.

If you are experiencing severe heavy bleeding and are bleeding through more than one tampon or pad in an hour, for several hours in a row, you should go to the nearest emergency room. 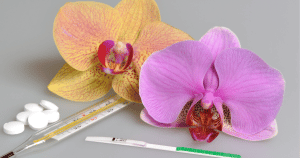 Symptoms of Hyperovulation – What is it? How Common & Causes?

6 Week Ultrasound Scan – Everything You Need to Know