Rebekah Vardy praises husband Jamie for being her Rock during her 16 hour labour.

Rebecca, 37, and her Leicester City footballer husband, 33, welcomed Olivia Grace on December 28, and Rebekah admits he was her rock  as she went into labour.

Rebecca told Hello Magazine ‘Jamie was brilliant – so supportive and encouraging,’ ‘He even tried to crack a joke about the epidural needle to take my mind off it and the painful contractions.’ … We are not sure how that joke would have gone down but it was sweet of him to try.

Rebekah revealed she has been very ill with anxiety and stress and was panicking that she might be born on Christmas Day whilst Husband Jamie was training with Leicester City ahead of his team’s game against Liverpool. ‘The last thing I wanted was to miss Christmas Day with our children.’ she said.

Former England star Jamie announced the birth on Twitter telling fans: ‘Over the moon to let you know our beautiful little girl has arrived. Becky and baby are both doing well and we are all totally in love with the newest member of our team.’ 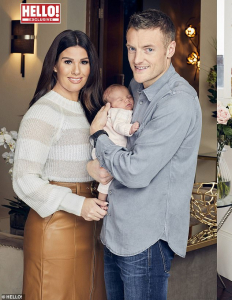 The brunette, who was admitted to Leicester General Hospital on December 27, said their children helped to choose the name “Olivia Grace”

The couple, who tied the knot in 2016, are already parents to daughter Sofia and son Finlay.

Rebekah also has 2 children, Megan and Taylor from a previous relationship. Jamie is father to daughter Ella, who he shares with ex partner Emma Daggett.

She also said welcoming her fifth child feels like a new beginning.

Commission Rates
View Cart Checkout Continue Shopping
Cookies help us deliver our services. By using our services, you agree to our use of cookies. Find out more.
Scroll to top