When Can I find out my Babies Gender? - MyBump2Baby
Grow your Business with MyBump2BabyFOR BUSINESS

Disclosure: There may be affiliate links within this article, which means at no cost to you a small commission may be earned if a product is purchased through the link.

When can I find out my babies gender?

Desperate to know pink or blue? Will you be buying pretty little dresses or action hero suits? When can a baby’s gender be determined? Your baby’s gender can usually be confirmed by the second scan- often known as the 20-week scan. At some private scan clinics expectant parents can find out out at 14 weeks. The sex organs are defined enough to show the sex of the baby. You can find your nearest ultrasound clinic here.

How can I find out my baby’s gender?

There are a variety ways- at different stages of your pregnancy- to find out the sex of your baby.

Finding our your baby’s sex is a very exciting time for many parents, it helps with the bonding of your child and you can also start to prepare for your babies arrival. There are companies out there that offer a blood test from 8 weeks pregnant but they have known to be wrong in the gender determination and they can be rather expensive.

The chorionic villus sampling genetic test is performed to test whether or not your baby has down syndrome.

This test is an invasive test which involves removing a sample of chorionic villus (a type of tissue found in the placenta) to reveal genetic information about your baby, including your baby’s sex.

This test can be performed as early as 10 weeks into your pregnancy.

Non-Invasive Prenatal Testing (also known as cell-free DNA testing) is a relatively new, non-invasive blood test which detects chromosomal abnormalities and conditions in the baby/fetus. Some of the conditions which the test can detect include Down syndrome, trisomy 13 and trisomy 18.

Since the test involves looking at your baby’s/fetus’ DNA, it can also be used to find out your baby’s sex.

An Amniocentetis test is used to detect developmental issues in your fetus. For this test, the doctor will take a small amount of amniotic fluid. The amniotic fluid will then be tested for cells which could indicate abnormalities.

The amniocentetis test tests for Down syndrome, spina bifida and other genetic conditions.

An amniocentetis can also reveal the gender of your baby.

This test can be performed between 15 and 20 weeks of pregnancy.

In vitro fertilization with sex selection

The Ramzi Theory is a very new theory that is growing in popularity. It can be performed in your first trimester of pregnancy (as early as 6 weeks) and it is said work out the fetal sex based on your placenta’s posistion. The Ramzi method has not been verified by any large health organisations.

Due to the lack of validation and scientific evidence of this method, it is not recommended to use it to determine your baby’s sex.

Whilst Wives’ tales are not the most accurate way to come up with a gender prediction, they can still be a fun to try and “figure out” your baby’s gender.

There are plenty of old wives’ tales which can be used to predict your baby’s sex, including:

For more old wive’s tales you can use to try and “figure out” your baby’s gender, click on the link below:

My experience with Booking a Private Early Gender Scan

I have a friend that went for a scan at 20 weeks and because the baby had her legs crossed they couldn’t see the sex and my friend had to then book a private scan.

When I was pregnant with George, I was desperate to know the sex of the baby because once I knew the gender, I could then start buying clothes and start thinking about how to decorate his bedroom. I personally felt like I would be able to bond more with my bump once I knew what the gender was.

Just before Christmas, I was 16 weeks pregnant, so I booked a gender scan. It was around £80 and it was brilliant. I couldn’t believe the difference from the 12-week scan to 16 weeks. George was rubbing his eyes and yawning and it just made me feel so excited. It was at that point I felt like I knew him.

The only problem with the gender scan is that they offer so many extras which will definitely tempt you to spend your money, for example: teddies with your babies’ heartbeat inside, a video, picture frames, keyrings etc..

Here’s what other MyBump2Baby mums are saying:

“I found out my babies sex at 1 4 weeks of pregnancy, i was desperate to know the sex after a high risk pregnancy ended in miscarriage the year before and i never found out. It was such an exciting moment finding out if my baby was a boy or girl. Finding out the sex of my little boy early meant i could start bonding with him earlier in my pregnancy. I was temped to do a blood test at 8 weeks but after reading negative reviews from other pregnant women i decided against it, i went for a sonographic fetal gender determination at 14 weeks 1 day and found out about my little boy, i was suprosed that pregnancy week 14 could be so accurate but it was and i would definately find out the sex of my baby that way again” 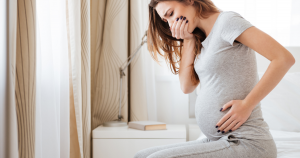 8 Weeks Pregnancy Symptoms – What is Happening to Mother and Baby?